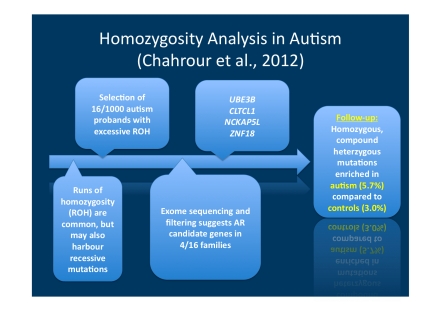 Autosomal recessive neurological disorders are usually distinct and severe diseases that result from the combination of two recessive alleles transmitted by parents. Autosomal recessive disorders are rare, but collectively account for a significant fraction of the genetic morbidity.  With respect to neurodevelopmental disorders including epilepsy, neurometabolic disorders and storage disorders frequently result in complex phenotypes that also comprise intellectual disability, behavioural issues and seizures. Particularly in populations with a high degree of consanguinity such as certain Arab populations, recessive disorders represent a major challenge.

Identification of recessive candidate genes. Using exome sequencing and stringent filtering, the authors identified autosomal recessive mutations in 4/16 families in four different genes including UBE3B, CLTCL1, NCKAP5L and ZNF18. UBE3B is of particular interest given the prominent role of UBE3A in Angelman Syndrome. The other genes do not have any obvious connection to neurodevelopmental disorders.

Validation in independent sample. The authors then continue to test for additional recessive mutations in an independent cohort of case and control, finding that recessive homozygous and compound mutations in these genes, particularly CLTCL1, are overrepresented in autism (5.7%) compared to controls (3%). Furthermore, they also show some functional evidence that the identified genes are upregulated in response to neuronal depolarisation.

Summary. The authors provide an interesting framework to probe exome sequencing data for recessive mutations. Given that recessive homozygous and compound heterozygous mutations in these genes are also found in controls, it would be premature to conclude that these genes are causative. However, the same framework could also be applied to other fields, such as epilepsy genetics. Parts of the research within EuroEPINOMICS Rare Epilepsy Syndromes (RES) will investigate the role of recessive mutations in RES in a similar way.

Lack of identifiable recessive disorders. It is also interesting to note what the authors did not find. In clinical practice, we are recurrently faced with the question whether a patient with autism or intellectual disability might actually have a potentially treatable metabolic disorder. The authors did not come across atypical presentations of known neurometabolic or storage disorders using their study design, suggesting that these disorders do not play a major role in non-syndromic autism.

Relevance for EuroEPINOMICS. These lack of identifiable recessive disorders, however, might not apply to epileptic encephalopathies in a similar way. It will be very interesting to revisit this issue in 24 months from now when much of the exome data from EuroEPINOMICS and other consortia such as Epi4K will have been analysed. I would personally still maintain the hypothesis that we will identify a sizeable fraction of recessive neurometabolic and storage disorders with atypical presentation.