Autism and environment. A much talked about recent twin study from California finds a significantly lower heritability in autism than previously estimated, reducing the heritability estimate from >80% to less than 40% and attributing much of the liability of autism to shared, probably prenatal environment. At first, this study may seem to add to the growing pessimism in the genetics field given the lack of explanatory findings from exome sequencing studies. However, things are not that simple and you don’t have to put your exome sequencers on Ebay yet. Also, don’t mention vaccinations again. Let me explain…How to assess the genetic contribution to disease? For some cases, the genetic contribution to disease is very obvious. For example, in patients with autosomal dominant familial epilepsies, in most cases family members are affected if they carry the gene and are unaffected if they do not carry it. Things get more complicated when the genetic contribution is less obvious. In many disorders, family members of patients are more likely than the general population to have the disease as well. In many disorders, this risk is only slightly elevated, but a clear pattern suggesting dominant or recessive inheritance is not seen. These are the complex genetic disorders, in which genetic and environmental factors both are important. This is the case for the majority of human diseases including many epilepsies. However, the difficulties start when we aim to quantify the contribution of environment versus genetics in these disorders.

Heritability. For many disorders, it is important to know whether environmental or genetic factors are the main contributors and this is where heritability comes into play. Heritability is an abstract measure that does not measure the role of genes directly. It is dependent on how much the environment changes and might even be different for the same disease in different places. The degree to which environment or genetics contribute to disease in an individual cannot be determined directly. So why not have an easier measure for genetics? Because there is none. No single gene by itself causes disease, but it always depends on the context.

Genetic disorder or environmental exposure. Phenylketonuria (PKU), a severe metabolic disorder resulting in epilepsy and intellectual disability if not treated, can be viewed as a purely genetic disorder. However, when patients stick to a phenylalanine-reduced diet, the disease barely manifests and can therefore considered as a case of chronic phenylalanine poisoning. How can you solve this issue for an individual and determine if it is a genetic disorder or a poisoning? You can’t! But you can look at a group of people and try to determine what the main difference might be between affected and unaffected individuals. Ideally, you would even look at an entire population. If everybody in this population carried the same genes, you would hardly pinpoint genetic factors as causative. Likewise, if a dietary factor, say phenylalanine, is present everywhere, it cannot be the difference between sick and healthy individuals. This comparison points out a very important point. When we try to quantify the contribution of genes vs. environment, the variation of genes and environment is important. In a situation with little genetic variation, the environment prevails. In contrast, when the environment is identical, the genes are more important. Quantifying this variability is what heritability does: heritability is the variance (statistical measurement for variability) of a phenotype that is due to genetic factors in the population. 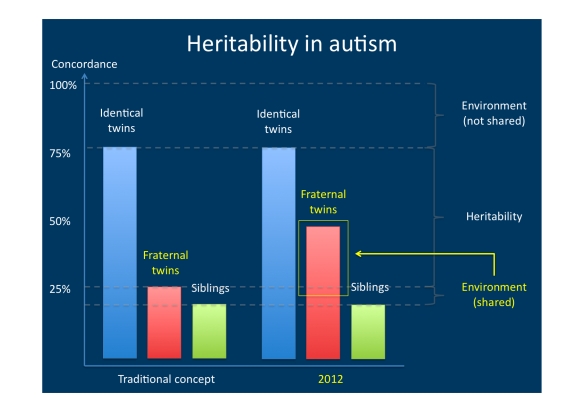 Model for demonstrating the differences in old and recent models for the susceptibility to autism. The California autism study has found a higher concordance rate in fraternal twins and more of the liability must be attributed to shared environmental factors than previously expected. The measures are not to scale. In contrast to the illustration above, the authors did not include sibs in their study, but arrived at their conclusions through statistical modelling in twins alone.

Heritability – don’t touch it. Dealing with heritability is dangerous.  Heritability is often confused with the direct contribution of genes to a disease, but it is actually a population-measure of variability. Even the website of the first-author of the recent autism paper makes this mistake when suggesting that genes account for 38 percent of autism risk. It is 38% of the variability of the tendency to have autism that is due to genes, not the risk directly. This measure is not very handy, as you can see.

The power of twins. Heritability can be estimated in population studies and more elegantly in twin studies. Comparing identical and non-identical twins allow us to directly estimate heritability. Most of our knowledge on the heritability of Idiopathic Generalised Epilepsy (>80%) and autism (formerly >80%, now <40%) stems from twin studies. Again, keep in mind that a heritability of 80% does not mean that a disease is “genetic”, it simply means that variation in genes are more important than variation in environmental factors at the time of the study. Look a few years later and variation in the environment might be more extreme and heritability might be lower. Therefore, it does not make sense to compare heritability between disorders and, more perplexing, a high heritability does not mean that you will find genes. Paradoxically, Genome-Wide Association Studies (GWAS) have been more successful in disease with lower heritability than higher heritability. Heritability tells us nothing about the kind of genes involved.

What does this mean for epilepsy? In recent years, autism has served as a model system for the epilepsies, particularly the Idiopathic Generalized or Genetic Epilepsies (IGE, GGE). For IGE/GGE, a high heritability is postulated by twin studies. It can be speculated that similar effects as those seen in autism might apply to the epilepsies as well. Moreover, let’s assume for a second that the heritability of the epilepsies is also suddenly halved by a large-scale population-based twin study. While researchers for future projects might use different approaches and investigate environmental factors, even in an extreme situation, the hunt for epilepsy genes is still worthwhile. As discussed above, heritability says nothing about the amount or quality genes to be identified. So far, genes are our best chance to understand how epilepsy develops.

9 thoughts on “Autism – the shared environment strikes back”