This time, the desert. After the successful meeting for Young Researchers in Epileptology in Kiel last year, we would like to invite young and senior researchers in the field for the 2013 meeting, which will take place on December 14th, 2013 in Sde Boker, Israel. This year’s meeting is embedded in a small international meeting from Dec 12th-14th on epilepsy genetics with the primary aim of bringing together researchers from Israel and Palestine. As last year, we would like to extend the invitation for this year’s Young Researchers Meeting in Epileptology to all young scientists involved in the field. Don’t forget to bring water and sunscreen; we’re going to the Negev Desert. 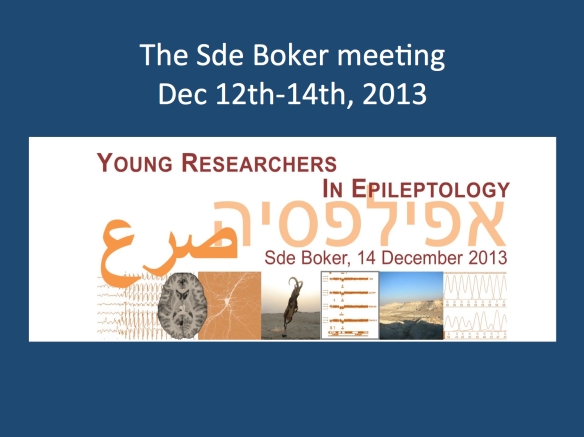 “Whoever seeks wisdom, south shall he go.” (Ben Gurion). Through the ongoing collaboration between the Ben Gurion University of the Negev (BGU) and the University of Kiel (CAU), we thought about opening up a meeting on epilepsy genetics to all young scientists in the field. While the Young Researchers Meeting itself will take place on December 14th, the overall meeting will last from December 12th to December 14th, ending with a trip to the Negev on December 15th. The registration details of this meeting can be found here.

The Sde Boker meeting will have 7 sessions including

The Young Researchers Meeting on December 14th will consist of three sessions including (a) presentations of projects by young investigators, (b) group workshops and (c) presentations on translational aspects by senior scientists. We have a growing list of confirmed international speakers and will post the preliminary program soon. Please let us know whether you will participate in this year’s Young Researchers Meeting in Sde Boker by filling out this form:

The 2013 Young  Researchers Meeting will be supported by the Ben-Gurion University of the Negev, the University of Kiel, the Peter and Jytte Wolf Foundation, the Israeli Chapter of the International League Against Epilepsy and the EuroEPINOMICS project of the European Science Foundation. As last year, we will grant travel support to young investigators. Places are limited! Sign up soon!

3 thoughts on “Invitation for the 2013 Young Researchers Meeting”